Sumeet
I am a student of Jyotisha or the science of Vedic Astrology. I closely follow the teachings of Sri Jagganath Center and Pt. Sanjay Rath. 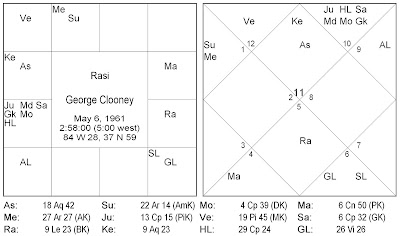 George Clooney is an accomplished Actor, Director, Producer, and Actor who is known for his work in Hollywood but also his political activism and media buzz around his personal life, i.e. namely his relationships and bachelor status. The key features of his Aquarius rising chart are

Unless George can find a way to get married during his Jupiter-Moon dasha 2010-2011 once he gets into his Saturn dasha then his prophecy of being single for the rest of his life will come out to be true. 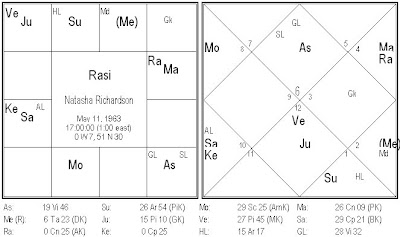 Noted British Actress from a well known thearatrical family died in a bizzare ski accident on March 19, 2009 near Montreal, Quebec. The chart with Virgo Ascendant has many positive qualities which should have provided protection but let's see the astrological combinations which contributed to the accident and the timing.

Key features of the chart

Accident occured in Mars-Jupiter-Moon dasha. Mars is the 8th lord in the chart and rules over Aries (head) placed in 11th house which is the 6th from the 6th or "hara sthana" and can indicate accidents. Mars also has the Arudha of the 8th house and hence that planet along with Rahu is quite dangerous for the native and shows potential for end of life via loss of blood of violent accident. Jupiter is maraka or killer in the chart and Moon and Mars are invovled in the "rudra yoga" which can be death inflicting. In the Navamsha chart Mars is placed 8th to Rahu which is a dangerous period for the native as well.

Since Venus and Jupiter are placed 3rd to AL the appearance of her death was not very violent as she had what seemed to be a minor fall from a small ski hill and she was feeling quite alright after hitting her head and later on she went into a coma and passed away with her family around her.

Natasha Richardson did a lot of charity work during her life and raised millions of dollars for worthy causes and created a lot of positive karma for herself and for people around her. Since death occured in sub period of Jupiter and sub-sub period of Moon, as per vedic astrology principles the soul left for higher spiritual abode.

Posted by Sumeet at 9:11 AM No comments: 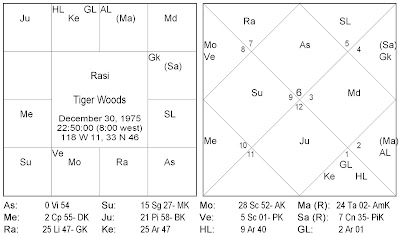 Tiger Woods recently came back from an 8 month lay-off due to knee surgery and is trying to establish his dominance in the golf world. Let's see if that is possible and the timing for the comeback by analyzing his horoscope as per the priciple of Vedic Astrology, the science of horoscope as taught by Seers in the Hindu tradition more than four thousand years ago.

Tiger was born in Mercury-Saturn period and enjoyed great success from as early as 2 years of age and this can be seen from the position of Mercury and Saturn in the chart and the latter giving results of the 5th house in a raj yoga setting.

From 1984 to 2004 Tiger was in a Venus dasha and all the raja yogas associated with Venus fructified giving him immense success and popularity. The greatest successes in his life came during Venus-Saturn and Venus-Mercury periods and the Year 2000 is believed by all to be a watershed year in golfing history when virtually all the record books were re-written by Tiger and it is fairly clear from the chart as to the reason for the same.

There was a bit of a slowdown in Ven-Ketu dasha from 2003 to 2004 and Ketu gives mixed results since while on one hand there is a bit of a "vipareet raja yoga" or success after a lot of hard work but on the other hand Ketu is placed 12th to AL so the image of Tiger is affected and he can expect some losses as per his high standards. As a result, only a handful of victories came during this period. Ketu placed in 8th house resulted in transformation and Tiger was going through major swing changes at this time.

This has been a very eventful planetary period to say the least. Leo lords the 12th house of losses in the chart and contains the manifested image of the career and Sun is placed 8th to the AL which sets up for tough times from an image point of view but Sun is placed favourably in the 4th house and hemmed by benefics and contains the Arudha of 7th house and gets aspect from poweful Jupiter which has a protective effect.

Nonetheless, Tiger lost his father during Sun planetary period which was a bit emotional strain for him given the close relationship they had and as can be seen from the chart as well. During Sun-Mercury-Venus period Tiger played the greatest game of his life but Mercury is lord of the Arudha of the 8th house and placed in Capricorn sign so also resulted in a knee injury and layoff.

Tiger is currently in Sun-Ketu period and similar to Venus-Ketu period as discussed before this is a time for hard work and transformation and wins are difficult to come by and it is a time for frustration as can be seen from his current play. Tiger managed one win during Sun-Ketu-Rahu dasha but it was very hard faught and the other player, Sean O Hair had a bit of a collapse in his game. Tiger did not catch such a break during the Masters tournament in 2009 and finshed outside the winner circle again.

What is wrong with Tiger Woods?

Well, nothing really. Astrologically speaking, Tiger is going through a cycle where he has to deal with some karmic debts and usually such a time is a bit frustrating but highly transformational. The good news for all golf fans is that Tiger's Sun-Venus period starts from June 11, 2009 and it promises to activate various raja yogas or combinations of greatness in the chart again which should make him a strong contender at the US Open and rest of the tournaments and majors in the year. Looking at other planetary combinations associated with the chart, the period from June-September would be a build up in form and the months of September to December are very favourable and he will come back to his dominant form that all golf fans are used to.